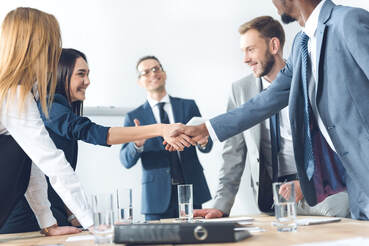 ​Rather than setting up an LLC or other entity, a joint venture agreement may be another alternative for people to use when considering how they will do business with one another.

The term joint venture itself is often misused or people simple feel it is another way of referring to a partnership without really forming a partnership. Either way, it is strongly recommended whether you call it a partnership, joint venture or something else, you have a carefully drafted agreement in place setting forth the terms and conditions of the relationship between the parties.

What is a Joint Venture?
A joint venture is a legal organization that takes the form of a short term partnership in which the persons involved in the project jointly undertake a project or even a single transaction for mutual profit. Generally, each person will  be contributing assets and sharing risks. Like a partnership, joint ventures can involve any type of business transaction and the "persons" involved can be individuals, groups of individuals, companies, or corporations.
The Internal Revenue Service does not require joint ventures to file a tax return as a separate entity. Technically it is not a separate entity and the only thing really evidencing there is one would be the joint venture agreement.  Likewise, a joint venture is not specifically required to acquire a separate Employer Identification Number (EIN) from the IRS.

Why choose a Joint Venture Relationship Instead of an LLC or Partnership?
Some of the key reasons for choosing a JV are that the transaction or project is limited so the parties do not want to form a long term relationship or partnership, especially if the parties already have their own partnerships, LLCs or corporations. The JV could also be of limited duration, say one year, and at the end of that time period the project or transaction should be completed, or it will have failed to come to fruition.
Key Areas to Cover in a Joint Venture Agreement

Key Clauses to Include in a Joint Venture Agreement
Depending on the nature of the project or transaction involved the parties should consider the following clauses to include in the agreement, some of which may actually be separate agreements themselves, rather than just a one or two paragraph clause.

Confidentiality Clause – Assuming there is certain information that one party must share with the other and which is of a confidential nature that should not be made know to the general public for competitive reasons, the parties should include such a clause. If the parties are separate operating companies with trade secrets, formulas, customer lists, patents, proprietary technology, and other non-public information, then a separate Confidentiality Agreement would more likely be used to cover all the issues.

Non-Circumvention and Non-Disclosure Clauses – These clauses are very often included in a confidentiality agreement, but not always. Sometimes they are used by themselves just to prevent the other party from going around them or circumventing them and doing the project themselves so they can make all the profit. The non-circumvention clause can also be used to prevent each of the parties from going direct to a customer, institution, government agency or even a single individual for future work of the same nature and kind as the project covered in the joint venture agreement.

Non-Solicitation Clause – Similar to the non-circumvention clause, this clause can be used to prevent a party in the JV from soliciting the other party’s employees to steal them or to prevent soliciting the owners, developers, or company which is hiring the JV to do the project.

Hold Harmless and Indemnity Clause -  This type of clause may or may not be necessary of the joint venturers are able to obtain insurance to cover the project or transaction. Even if insurance can be obtained, the parties may want to include language that states one party must hold the other party harmless and indemnify them form any damages caused by the other party’s fraud, negligence not covered by insurance, or intentional acts that cause damage.

Make sure you have carefully weighed all the issues, risks, benefits and opportunities when deciding on a JV relationship and be sure to have experienced counsel advise you and prepare the joint venture agreement to be sure you cover all the bases.
google-site-verification=qbvye5UPT1Mg129hkn89u8XuEvUiXQHR1Hy_l7A1Odw